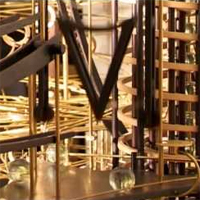 KINETIC is a short film based on kinetic objects by the visual artist Mark Bischof, objects in which rolling glass marbles play an important role. These apparati are not designed for any practical purpose, but as expressions of movement and rhythm.

The film consists of four studies of glass marbles in motion, how they roll and whirl. Four chapters, whose film images occasionally put one in mind of early abstract films; mechanical ballets of elements that turn, move and rush around. Films that concern themselves not only with recording actions that take place before the camera, but with the rhythm and movement of the images themselves.